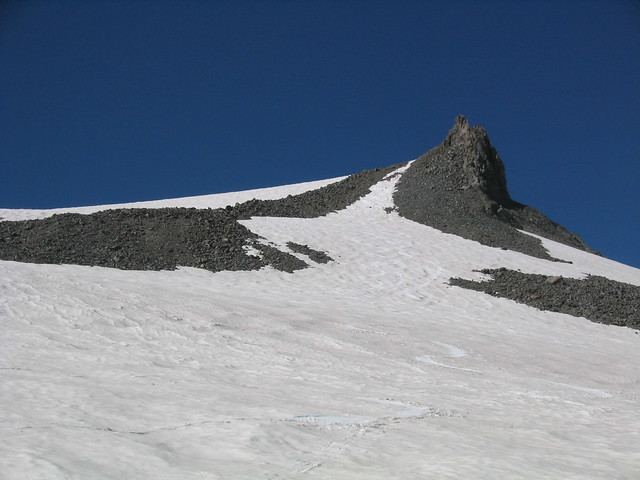 Phil Armiger, Martina Jambrichova, Cherry and I lugged skis up from Mowick Lake on the north side of Rainier to below Observation Rock and farted around over Labor Day weekend.

Mowick lake is about 5,000 ft and the parking lot was mobbed. It was a pretty hot day and we got lots of stares marching out with skis strapped on the packs. Left the crowds after the first 1,000 ft.

Ranger was checking back country permits, so don't skip that part. We met a family led by a very angry, frustrated father tromping down after having been caught permitless in the backcountry, shamefaced that he couldn't argue the volunteer ranger out of an exception for his brood.

We camped about 7,000 feet near snowline, below the Russell Glacier between Observation Rock and Echo Rock. This was the closest I'd ever been to Liberty Ridge, and the clean incredibly steep angle was awe inspiring.

Cherry and I pitched camp on an exposed point with great views. Phil and Martina opted for a more protected spot behind a man-made rock windbreak. Martina had no interest in spending another night battling wind as she had on Shucksan two weeks before. Confident in our trusty Bibler, I scoffed at Phil for cowering behind the rocks like a quivering rodent, and bedded down for the night.

This turned out to be Stupid Boy Mistake number 5,614. Although the tent held up great, I forgot that it's really hard to sleep when you're being blasted all night long with fury akin to the south end of a north facing Boeing chicken test. We finally drifted off when the wind eased around 8:00am. At 9:00am we got up, kind dazed, and made very strong coffee.

Up from camp the snow was very firm and sun-cupped -- not nearly as sweet as on Shucksan at the same elevation just two weeks before. Swirling clouds hid the mountain, and Cherry split off for some lower runs out of the fog. Phil, Martina, and I headed up to 8,000 ft or so into a whiteout, where I lost my nerve for crevassed dodging and headed down. I stopped along the way to scramble Observation rock, (crappy work off the mote but otherwise a walkup), and then skied back to camp. Phil and Martina found nothing but big holes higher up, so came down a few hours later, Phil tagging the peaklette too. We hiked out with no incident.

If you've never spent much time on the North side of the mountain this is a great area. It's easily an hour closer to Seattle than Paradise, and the whole north face is steeper and more foreboding than the South. For skiing it would be better earlier in the season. 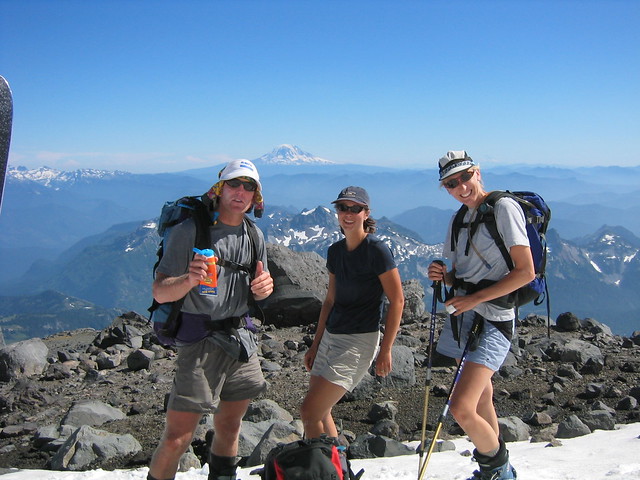